Increasing the Airflow the Dangerous Way

One of the common complaints about the EWI is that it doesn't allow enough air to flow through it. People talk about drilling holes in the silicone mouthpiece, which IMHO could compromise the materiel as silicone tears really easily. If you take the time to take off the mouthpiece, you will find it lets more than enough air flow through it - and if you look at the internals of the EWI USB you will see that the tube for air to go through the instrument and it's end cap are much MUCH wider than the connection between the mouthpiece and the tube... and there's a possible solution, widen that one connector!

*** NOTE *** You botch doing this you could irreparably damage your EWI. The plastics used in it's construction are an injection molded thermoset resin not meant to be machined in any significant manner. I almost broke mine in the process, and I have pretty good command of the proper tools for the job. Attempt this at your own risk.

Taking some measurements, I found the 'end cap' at the bottom of the instrument to be roughly 1/8th of an inch diameter, while the holes in the top area were a mere 1/16th (see top picture in sidebar), effectively half that. Because of the thickness of the plastic up there I was unwilling to try a 1/8th inch bit for drilling it out to match, so I settled on a 3/32ths inch bit, right in-between the two. I started out with a hand drill partly to prevent the plastic from melting, partly because I don't have a drill press.

Before drilling you will want to remove the bite sensor, which consists of two nickle plated spring steel shafts separated by a thin piece of plastic held in with a single screw and nut. Be careful with the wires as they are absurdly thin and break off easily - I broke off the white wire just trying to take it apart, so I grabbed some heat shrink wrap and resoldered both of them, and shrink wrapped them making the connection more durable.

Drilling started out smoothly and I was able to finish the side that connects to the air hose to the depth of the bit. You will find you need to blow/clean out the channel frequently as you can clog it completely with the cruft from drilling - making it pass NO air. Switching it around it fought me a good deal more and I did something stupid - I went for the electric drill out of frustration...

... and immediately melted off the part that plugs into the silicone mouthpiece, with that entire section effectively glued the end to the drill. After cleaning off the drill, contemplating seppuku, and accessing the damage I found there was still just enough 'lip' left to form an airtight seal with the silicon - see the middle picture in the sidebar. So while that was a big 'oops' it was not a fatal one. Had I made the same mistake on the other end where the air hose connects, I'd pretty much have broken the EWI.

In widening the hole you will find that internally you break through a wall into what looks like a molding post. When they manufacture plastic parts they will often have posts sticking up to reduce the amount of materiel needed in the mold, as well as reduce the chances of thicker parts making air bubbles (or should I say WD-40 bubbles). Because this is a non-essential 'hole' in the design, you can simply plug it up with epoxy as shown in the final picture to the right.

Putting it all back together at first I didn't really feel like there was all that much improvement in airflow, but I quickly realized after playing for a few seconds that it seemed like I got a lot more range out of the pressure sensor, so that's a definate improvement.

After my flub and dealing with the particulate and behavior of the resin, I am not certain I would recommend this method to the timid IF AT ALL. As it is the re-arrangement of the airtubes IMHO made a much bigger improvement in allowing air through, though the increase in dynamic range on the sensor may be worth it to many... if they are willing to risk it. I am half tempted to suggest instead you may be better off getting a proper diameter steel or copper tube, varnishing the inside and just snipping off the connectors on both sides and drilling out room for that. If I were to do that, I'd make certain to varnish it so you don't have to deal with rust and seal the whole thing with epoxy. 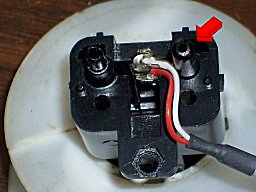 The original hole sizes, the red arrow points at the "through" hole, which you can see is even smaller than the one for the pressure sensor. 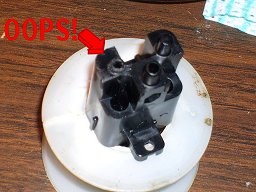 ... and this is where impatience can kill you. switching to an electric drill heated the plastic up enough it melted onto the drill bit. Thankfully this was on the side that presses up against the rubber mouthpiece, with just enough "lip" left to form a seal. 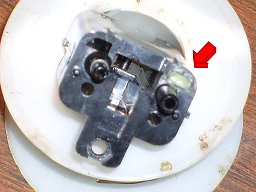 Widening the hole did break through the wall into this "chamber" letting air leak out. The area our new shaft leaks into is just a side-effect of how plastic parts are molded and can be plugged as I have done with epoxy.