Before I start making major changes to mine, I figured I would share the dissassembly with everyone since I was looking for tips on taking one apart, and came up empty. it's a very easy device to take apart if you take your time and apply a little common sense.

Back of EWI with screw locations.

The first thing to do is make note of the screws. If you click for the larger picture I have pointed arrows at all the locations of which you want to remove screws. Notice I've put warnings over the pitch benders - these are connected by wires to the same board as the grounding plate, and having them "flopping around" during dissassembly is annoying at best - besides I wouldn't bother removing them or that board unless there is something wrong with it. There are 16 screws on the back to be removed. On some models all of them are the exact same length and thread, while on some other models it appears the one behind the USB connector is slightly shorter, so pay attention for that. I have to say after doing laptop repairs for years, it was refreshing to find a device that all the screws take the same size phillips head, with only two major types of screw used. 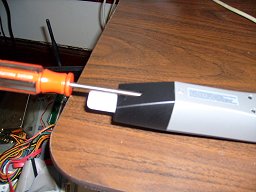 Screwdriver in the mouthpiece screw hole. 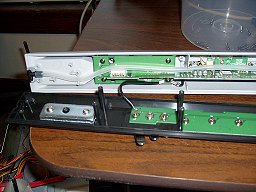 One thing to watch for when pulling the two halves of the body apart is that there is an edge connector between the black "face" and the main circuit board, so you want to pull the center area straight apart to avoid damaging the plugs - Also there is a ground strap running from the control board to the USB board. As such, do NOT just start yanking it apart and take it slow.

In the background you'll see an overturned CD tray in which I kept the screws - I know it's electronics 101, but having a container, any container in which to keep the screws organized is an incredibly easy step to skip, and you will pay for skipping that step eventually.

Also take note of the extra weighted plate screwed in there - we will get to that shortly. 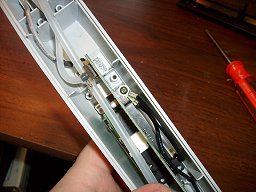 In the upper area of the body we see two more ground wires being connected. Reconnecting these during re-assembly is very tricky, I highly suggest a magnetized screwdriver for the task... thankfully it's all wiring and solid state, so there is nothing in here which would be significantly effected by the light magnetism of most screwdrivers.

Next to that is the connection for the air pressure hose - which reveals something interesting. If you look in the end of the mouthpiece you will see that the single hole divides into two separate holes - on the back these go to two separate tubes. One of these tubes runs the whole length of the body to the bottom - so one of them is not used for sensing at all. The other tube runs to the pressure sensor - but has no actual "throughput"... This means the tube carries nothing but pressure, likely preventing any moisture from building up in that smaller tube.

Because the "bypass" tube which lets you actually breath through the instrument is entirely separate, this could be an easy way to increase the airflow without doing things like "drilling the mouthpiece" as some Yamaha owners do. If you could cut away some of the rubber inside the mouthpiece with like a drill increasing the diameter, and increased the diameter of the plastic connector (which also holds the bite sensor) for just that side, you could modify the device to allow much greater airflow while making it appear pretty much stock from the outside. I may order a extra mouthpiece to experiment with on that - though after owning a Casio DH-100 which came out in the 80's, I am fairly used to the more restricted airflow.

The sensor tube is not just pushed on, since it is a closed pressure system the tube also has simple spring clips on both sides. I suggest that when you take the tube off you move that spring clip two or three inches up the tube to prevent it from slipping off - it's really tiny and would be way too easy a thing to lose by accident. 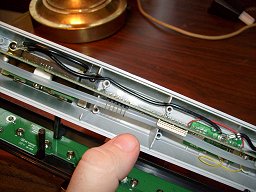 Wire you will want to inspect and be careful around.

While we are in the neighborhood let me point out a wire that could cause issues - when I opened mine up this wire was fairly well "smooshed" as it looks like it got crimped in the screw-posts... When I went to re-assemble later on this wire kept getting in the way until I put two drops of hot glue underneath it and ran it where you see it in the pictures. They really should have cut some sort of channel or other location for that wire to run - and being it's part of the grounding system this wire if compromised could explain some people having poor control response. If the top keys all stop working, but the octave rollers still function, that wire would be the first place I would look. 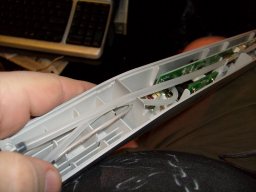 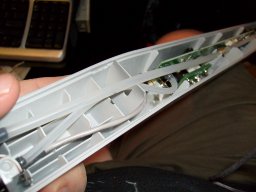 Where I rerouted it.

In that same neck of the woods I found that the two air tubes and the wire for the bite sensor were all run through the same center cutout. There was not enough room for all three of those and there's an empty cutout the same width as the sensor wire to the right - so I think the wire was run the wrong way and that was squeezing the tubes reducting throughput.. this would not effect the sensor tube since it's not a throughput and pressure equalizes quickly, but it would restrict how much air you can pass through the instrument. In the second picture you can see I moved that wire over. It does seem to have made a bit of difference. 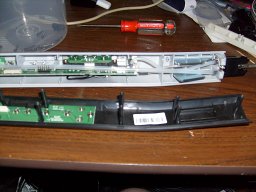 Moving on if we look over the upper half we can see two of the weights. These two plates are entirely there to add "heft" to the instrument - which given how it works actually was working against me making it hard to hold onto. The top two just pull right out. If you refer back to our picture of the bottom grounding wire, you can also see the bottom weight which is held in with two screws. That's three weights in total that don't feel like they should make that big a difference, but it really makes a difference in holding onto it by taking them out. 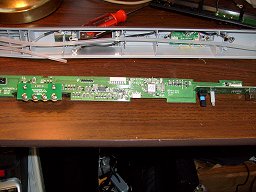 The boards removed as one piece from the bottom half.

The angles of the connectors and way the boards fit into each-other gave me pause, so I decided to pull the four screws holding in the rollers and the four other screws on the USB board, to remove the mainboard and the top and bottom daughterboards all at the same time. As it turns out this was not neccessary for the USB board, but I highly recommend if you are going to try to pull the mainboard, you leave the roller daughterboard attached as unlike every other daughterboard, the roller one plugs in sideways - so don't just try yanking the mainboard straight out.

Looking at the case and then the standoffs for the reset button and status LED is proving really encouraging as I should be able to stuff a few more features inside the case. I was hoping that the USB connector would be on a cable so I could do a simply bypass to add a hub, but I can just as easily cut a couple traces on the board and wire in the various things I've talked about like a hub, flash drive, WUSB adapter, gyroscopic sensors, etc. 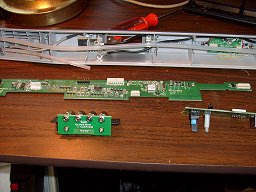 The boards pulled apart - they are literally just held together by their connectors. The two daughter boards pictured are just circuits for the buttons with no real componants on them, as is the board you can see still inside the case for the grounding plate. Part of me is suprised how little in the way of major componants are on the actual mainboard, but having played with the arduino I'm also suprised how many parts are present. The white sticker over what I believe is the main chip seems to be there to obscure what it really is - I get ambitious and I'll pull that off sometime in the future. 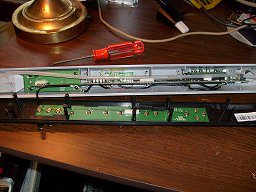 Everything back where it goes.

Re-assembly is a snap, I put the USB board in first, then put the roller back on the mainboard, and installed those together. Screw down the grounding straps, and you're ready to close it up. After putting the screws back in and closing it up it appears I did not make any mistakes, and it's running just fine - woo hoo.

For the more curious of you as to what's inside there, I hope this satiates your desire to open one up... for those of you like me who are looking to make improvements, modification, circuit bending and a general hot-rodding/experimenting with the "bargain basement" model of the EWI, it gives you some idea of what to expect when the screws come out.

As always, hope this helps someone - Jason M. Knight (aka Deathshadow) 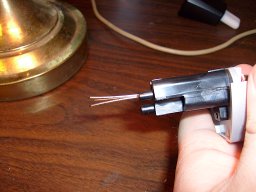 Details on the bite sensor. A fairly simple reed type capacitance guage - The insulating plastic down the middle spaces the two pieces of spring steel away from each other. As you bite the two springs are moved closer together changing the capacitance across the circuit. I was expecting something a bit more complex - this is a very ingenious and very simple way to implement it. 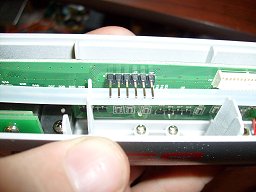 This connector inside the case is unused, and is unlabeled. I would assume that it is probably how they flash the initial firmware and perform diagnostics on the device, much akin to the similar form factor connector on certain Arduino knockoffs like the seeduino, or more advanced Atmega based devices like the Sanguino.

Maybe this spring when I can thaw out my workshed I'll go in with a logic probe and identify the various chips used on the design to see if I can do anything useful with those pinouts. As it is I'm playing with maybe squeezing an arduiono into the case to give me a programmable controller for adding extra buttons.

This closeup shows the part numbers for the "Roller Spacer PCB" and "Main PCB", and more importantly the pressure sensor used in the device, a Motorola MPX02010GS 1.45PSI Max transducer. - Since there appears to be a coil and a capacitor nearby I'm assuming they are ramping up the usb 5v to the rated 10 volts.

This is a boon to me as I've always wanted to build my own wind controller - and between being able to leverage atmega microcontroller based boards like the arduino and now knowing what sensor they use in a real one, I'm a heck of a lot closer to pulling it off.

The following sites contain information that may be useful when working with MIDI, USB or the EWI.

When working in MIDI there are a number of tools that can let you do things - things like the reverse engineering of the system exclusive/NRPN data - which might normally not be possible, or take much longer than they should. We recommend the following software whenever such work needs to be done.