Rather than develop an in-house application for the EWI USB, Akai chose to outsource to Garritan for a simple player. The key word is simple as a lot of the controls I would expect from a performance grade tool are flat out missing and in general the application has a very 'unfinished' feel to it, like it was rushed out the door last minute. To even get it to work properly I have to resort to using ASIO4ALL on EVERY ONE of my windows based computers.

While it is better behaved on the Mac, many of the same problems exist, from endless pages of scrolling when trying to change the controller data the EWI is sending, to dividing up information and controls that could easily fit a 800x600 display area into multiple tabs. The main panel has these 'knob' like controls which are counterintuitive as to how they interact with the mouse, and there is little if any keyboard controls or rapid way to change multiple settings while playing - making it effectively useless for performances.

In terms of samples used in playback most of them are quite acceptable, though the synthetic 'ring' present in most synthesizers are still quite noticeable on the woodwind and brass patches. Curiously the synthetic sounds are HUGE compared to the accoustic ones, indicating IMHO they spent more time on the sounds that don't sound like anything REAL than they did the ones that are supposed to be normal instruments... But then I never understood the average wind controller player's obsession with "fat synth" type sounds since to my ears they always sounded like ass anyhow.

It also doesn't help that they buried the system requirements, and that the stated requirements are three or four times higher than what is actually needed for something so simple and lightweight.

Still, it was bundled with the hardware, so one really doesn't expect a whole lot out of it. I do hope they improve the product and release some sort of update for it - because it sure could use one. 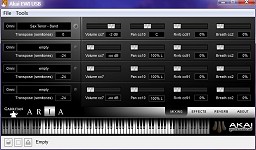 We at EWIUSB.COM have made a replacement Skin for the Aria software. It addresses a few of the above mentioned issues, first condensing the application to be more small display friendly for the users of netbooks, second to move the transpose controls to the main page and show all your transpositions at once.

I'm going to be honest with you - almost ALL PC compatibles lack the ASIO drivers needed to use the Aria software (or most soft-synth software) properly. Therin the majority of computers in the world are flat out NOT compatible 'out of box' with the software they chose to package with the EWI USB.

ASIO4ALL fills that gap opening up Aria and several other audio softwares for use on systems that normally wouldn't be able to use them. It turns ASIO calls into 'proper' Windows calls.

Go to our our ASIO4ALL page for more information about it and how to configure Aria to use it.